Local Attachments: The Making of an American Neighborhood, 1850-1920

In Local Attachments Alexander von Hoffman explores the emergence of the modern urban neighborhood in the United States during the late nineteenth and early twentieth centuries by examining Boston's outer-city neighborhood, Jamaica Plain. Like other American urban neighborhoods of the era, Jamaica Plain experienced the arrival of many ethnic groups, a house-building boom for members of every social class, and the creation of commercial, industrial, and recreational areas within its boundaries. Despite this diversity, a vital neighborhood culture bound the residents of the neighborhood together. Yet in the end, political reformers and twentieth-century mores shattered the unity of the turn-of-the-century neighborhood and contributed to a decline in the quality of urban life. Drawn from a wealth of primary sources and illustrated with more than fifty photographs and maps, Local Attachments offers a detailed look, from the inside out, of the evolution of urban America. 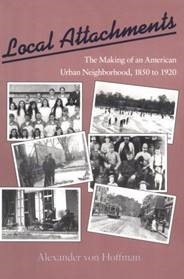