The Rent Eats First: Rental Housing Unaffordability in the US 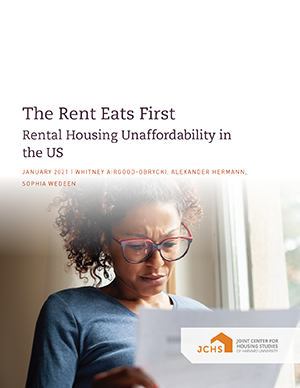 Even before the COVID-19 pandemic, renters in the United States were facing a housing affordability crisis. Nearly a quarter of renter households were spending more than half of their incomes on rent each month, leaving little income to cover other expenses. This paper examines the housing affordability crisis using a residual income approach to identify renter households whose housing expenses are too high and who lack the income to enable them to meet a basic but comfortable standard of living. Traditionally, housing policy has relied on percent of income measures to indicate whether housing is affordable. Over the last three decades, Michael Stone and other researchers have called for the use of a residual income approach to measuring housing affordability, looking instead at the array of expenses that households have and using spending estimates to calculate what a household can actually afford. Our work builds upon this concept, comparing standard cost burden rates for working-age renter households to residual-income cost burdens. The findings reveal both the challenges of high housing costs and insufficient incomes that keep many American households from meeting their basic needs.

Using a modified version of the Economic Policy Institute’s Family Budget Calculator and data from the 2018 American Community Survey, we estimate the number of renter households that do not have enough income to afford a comfortable standard of living after paying rent and utilities each month, which we refer to as residual-income housing cost burdens. Descriptive statistics illustrate that 62 percent of working-age renter households (19.2 million) are burdened under the residual-income measure. Logistic regression models indicate that having children, being out of the labor force, and being a person of color are all associated with higher odds of having residual-income cost burdens. Ordinary least squares regression models show that these same characteristics are also associated with having less income left over after accounting for all household spending needs.

Finally, we examine several policy levers, including universal affordable housing, expanded healthcare subsidies, and reduced food costs. We find that a combined policy that addresses both housing and transportation affordability would have the largest impact on reducing residual-income cost burdens, but even this complex policy would reduce burdens only at the margins and only for middle- to higher-income renters. Income supports and/or policies that reduce multiple spending categories will be needed to ensure the lowest-income renters can attain a comfortable standard of living.