“Remember, this is Brightmoor:” Historical Violence, Neighborhood Experiences, and the Hysteresis of Street Life 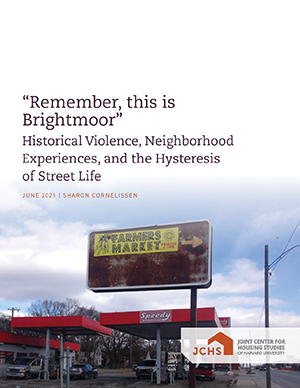 Drawing on three years of fieldwork, this article explains the emergence and persistence of two conflicting styles of street life in Brightmoor, a depopulated, majority Black, poor Detroit neighborhood facing early gentrification. As most longtimers were inured to historical neighborhood violence, they tended to act vigilantly in public, even after recent crime declines. By contrast, white newcomers, most of whom had moved from middle-class neighborhoods, often defied vigilance such as by organizing a farmers’ market across from an open-air drug market. They mobilized aspirational public life as a means for changing the neighborhood and end in itself. To explain these conflicting styles, this article theorizes the cultural mechanism of “the hysteresis of street life.” Styles of street life, shaped by residents’ unequal historical neighborhood experiences, tend to linger under conditions of gradual neighborhood change. It also shows how the hysteresis of street life may contribute to the reproduction of inequalities.