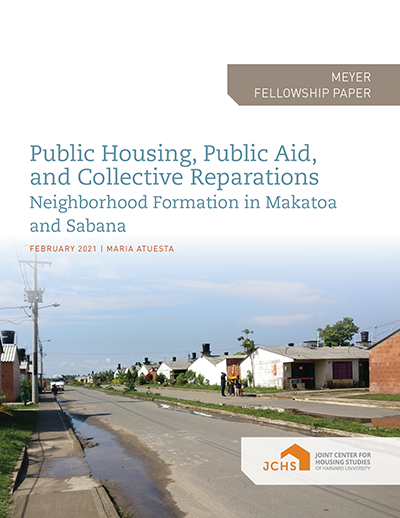 How are neighborhood communities created when the government provides free housing to a specific population? The paper examines the formation processes of displaced neighborhood communities and their collective efficacies in two free housing projects established after a public initiative to provide free housing to Colombia’s more than 8 million internally displaced persons. Situated in Granada, a city of around 80,000 inhabitants located in Colombia’s eastern plainlands that has absorbed tens of thousands of internally displaced persons, the paper finds that although public housing has granted displaced individuals with a new place to own and stay in the city and a right to make claims as legal owners of property, such public provisions also amplify conditions of social exclusion limiting residents’ capacities to effectively make claims as a collective and access basic residential infrastructure—besides housing—to inhabit the city.

This paper draws on a doctoral dissertation that was written after one year of fieldwork in Granada, between 2018 and 2019, where the author conducted interviews, participant observation and systematic review of city council minutes with a focus on neighborhood formation processes in three different types of forced resettlement environments: government-sponsored public housing projects, illegal land occupations, and illegal subdivision and development of private, or public, land. Having received displaced persons representing about one third of its urban population over the last three decades and having seen a wide variety of new neighborhoods emerge—largely inhabited and built by displaced persons—Granada is an ideal place to study and compare the impact of different types of resettlement processes on the creation of neighborhood communities with more, or less, capacities to transform, effectively, the conditions in which they live.