The Many Flaws and Weaknesses of FHFA’s 2021 GSE Scorecard 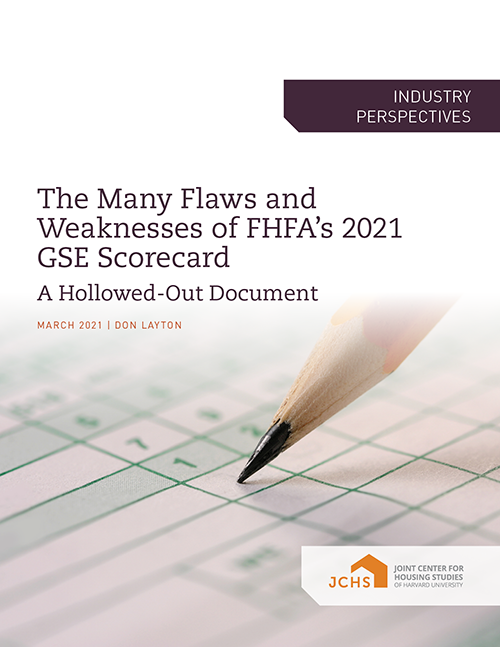 The Federal Housing Finance Agency (FHFA) on February 16 released its 2021 Scorecard for the government-sponsored enterprises (GSEs) Freddie Mac and Fannie Mae. The scorecard, first issued in 2012, was designed to be a public document to provide transparency to the mortgage industry and policy community so they understood where the FHFA was taking the GSEs during conservatorship; more broadly, it was meant to show transparently to taxpayers, who were (and still are) financially supporting the companies, what was being done with their money. The 2021 scorecard has at least thirty-six specific goals, and Don Layton argues in this paper that they are riddled with problems. Quite a few requirements duplicate already-existing obligations on the companies, others are contradictory, some are just unclear, and several others are outright impossibilities. At times, the scorecard seems to engage in signaling about ideology rather than providing implementable direction to the GSEs. Furthermore, the criteria for its listed goals are entirely qualitative and judgmental, never quantitative; this absence of quantitative criteria erodes the scorecard’s level of transparency. All together, these weaknesses decrease the scorecard’s value as a communications vehicle: it conveys less content with less value, and it does so less transparently.