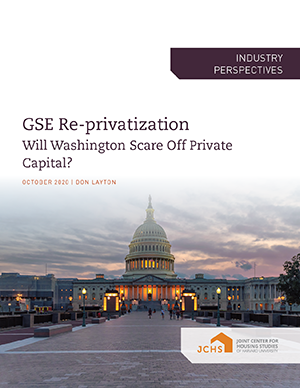 The two government-sponsored enterprises (GSEs) Freddie Mac and Fannie Mae have just entered into their thirteenth year of conservatorship, despite its originally having been designed as a temporary “time-out.” In September 2019, the Trump administration began the process of ending the conservatorships and recapitalizing the two companies by “administrative means” – that is, without the need for any new legislation. As part of this implementation, the two GSEs will need to build up an immense amount of capital: the current proposal by the FHFA for a new capital rule would require over $240 billion. The two GSEs will therefore have to become very attractive to equity investors – not just to one or two types of investors, but to the clear majority of all large institutional equity investors globally if the record-setting amounts required are to be successfully raised at a reasonable price.

In this paper, Don Layton describes what the companies today represent as an investment opportunity. He reviews four issues where the government is already acting or has a real risk of acting contrary to this need for the GSEs to be significantly attractive to equity investors; examples of a level of government policy instability with respect to the GSEs that is just much higher than investors get from owning the equities of other companies, whether they be large financial institutions, regulated public utilities, or even other mortgage-market companies. If this policy instability is not significantly reduced over the next few years, Layton argues, it is going to be almost impossible to raise the record amounts needed. Thus, the need for government officials to shape their actions to support a high degree of investor attractiveness by reducing today’s undue policy instability and building a post-conservatorship GSE “business model” is seemingly bipartisan: both the Republicans and the Democrats need to keep this goal front and center when it comes to their policy choices if they want the GSEs to become fully capitalized in some reasonable timeframe as part of exiting conservatorship.