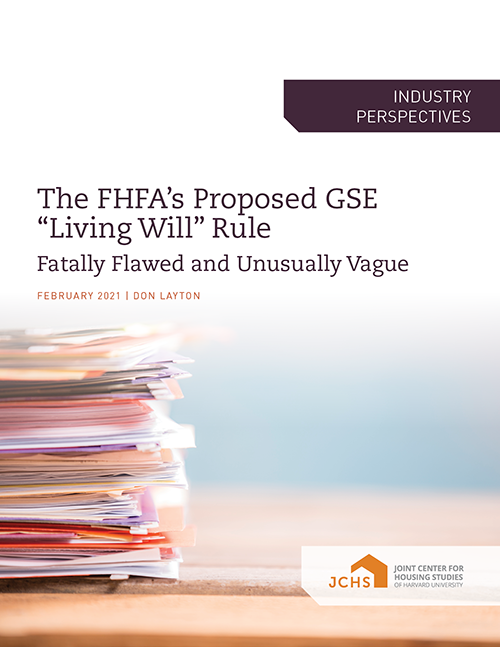 The Federal Housing Finance Agency (FHFA) recently announced and is seeking public comment on a proposed “living will” rule to apply to the two government-sponsored enterprises (GSEs) Freddie Mac and Fannie Mae, which it regulates. Such a living will, more officially known as a “resolution plan,” is defined by the Federal Reserve to be a “strategy for rapid and orderly resolution in the event of material financial distress or failure,” where “resolution” means the partial or full wind-down of a bank or other financial institution until the impacts of the financial distress or failure are eliminated. Only the largest banks, those designated as “systemically important,” are subject to the requirement for a living will; for the GSEs, a living will has relatively little value versus what it does for systemically important banks. There are three key reasons for this difference: (1) the structure of a GSE is, compared to that of a large bank, ultra-simple: a GSE operates almost totally via one legal entity, in one country and in one currency only; (2) because about 90 percent of GSE assets are financed by pass-through mortgage-backed securities (MBS), a GSE in a living will situation faces liquidity risks that are dramatically reduced compared to those faced by a bank; and (3) in some future GSE distress situation, when policymakers consider the health of the economy and homeownership, receivership will probably prove to be a very unattractive policy alternative compared to others that the government could deploy, so its likelihood of occurring is in practice quite minimal.

Nevertheless, the proposed rule has been issued by the FHFA, and it indicates the effort for the GSEs to produce such a document will be quite a major undertaking: it will take years to do and I estimate will probably require thousands of pages of submissions. Trying to understand why the GSEs were being required to make such a major effort even though a living will has relatively little value for them, this paper argues that the FHFA’s living will rule proposal is fatally flawed. At its heart are at least two key structural design features that are provably wrong: (1) the denial that the government support agreement for the GSEs exists and can be relied upon, and (2) the requirement that the GSEs plan to continue operations in receivership without that support, despite its being necessary and integral to their business model.