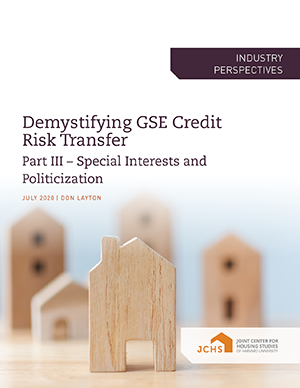 This third installment about demystifying single-family mortgage credit risk transfer (CRT) by the government-sponsored enterprises (GSEs) Freddie Mac and Fannie Mae describes a series of attempts to politicize CRT, including an analysis and correction of the many misconceptions integral to those attempts. For the purposes of this article, Don Layton defines politicization as the attempt by special interests to force changes to their advantage through the power of government, and argues that such politicization plays a major role in GSE activities, and in housing finance more broadly. However, due to several factors and unusually for a major change in the business model of the GSEs, the CRT program was built free from the lobbying and influencing of special interests that otherwise would have attempted to force changes to their advantage; instead, it was primarily a business-like program to reduce the taxpayer’s exposure to GSE mortgage risks on an economically efficient basis.

Eventually, CRT did show up on the special interests’ radar: it was recognized more broadly as a major change in the GSE business model starting in 2015, a full two years after the first CRT transactions and at a time when the program was already going strongly. At that point, the lobbying and influencing began. This effort was driven mostly by commercial groups seeking to protect or increase profits, but sometimes also by the ideological goals of either enhancing or reducing government’s role in the economy versus the private sector’s. This paper describes several specific attempts to utilize the power of government to change the direction of the CRT program, as well as the supporting narratives that accompanied them or more broadly circulated within the housing finance policy community. Viewed in their entirety, these attempts constitute a classic case study of what politicization looks like at ground level. Importantly, a major new attempt to change the direction of the CRT program looms large right now in the form of the capital requirement rule recently proposed by the Federal Housing Finance Agency (FHFA) to apply to the two GSEs.