COLLABORATION BY DESIGN: PRO NEIGHBORHOODS THROUGH A CAPITAL ABSORPTION LENS 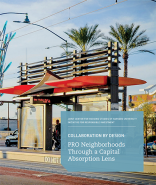 In the Spring of 2017, the Initiative for Responsible Investment interviewed a number of awardees of the Partnerships for Raising Opportunity in Neighborhoods, better known as PRO Neighborhoods, a five-year, $125 million initiative by JPMorgan Chase & Co. to sponsor collaborations among Community Development Financial Institutions (CDFIs). These interviews sought to draw out insights and observations that would be valuable to members of the community investment system, especially funders and grant-makers, as they consider the effective design of future projects and funding mechanisms.

Applying the framework of capital absorption, this brief review suggests some initial thoughts on how support for formal collaboration may foster CDFI capacity development in new areas of expertise at three levels:

The PRO Neighborhoods focus on innovation and collaboration led practitioners to engage a variety of actors in the broader ecosystem, including community advocacy groups, political and governmental bodies, trade associations, and collateral financial services. The challenges of engaging actors in a necessarily transaction-focused environment could be explicitly incorporated by grant makers into program design and adaptation. The interviews point to the importance for CDFIs of thinking not just transactionally but strategically— of considering not just the transaction at hand, but the broader system of community investment in which CDFIs operate. Funders, and other actors in the community investment system, can benefit from the lessons that emerge as CDFIs collaboratively tackle innovative lending practices.