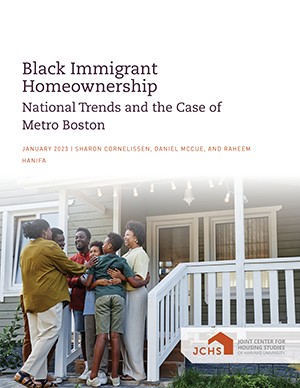 Persistent racial and ethnic gaps in homeownership rates have recently led policy makers to create a range of programs and initiatives to expand and maintain Black homeownership. These include developing special-purpose credit programs targeted at Black and Hispanic buyers, issuing more small-dollar mortgages below $100,000 to finance lower-valued property, and innovating credit score models. These efforts must account for the fact that Black homeowners live in a broad range of locales and circumstances. Indeed, the demographic composition of Black households has changed over the past few decades. In 2019 nearly one in eight households headed by a Black person in the US (12%) was headed by someone born in another country, having migrated from countries including Jamaica, Haiti, Nigeria, Ethiopia, Ghana, Trinidad & Tobago, the Dominican Republic, and Cape Verde. As of 2019, 2.0 million households were headed by a Black immigrant in the United States.