America’s Housing Finance System in the Pandemic: The Causes and Policy Implications of Credit Tightening 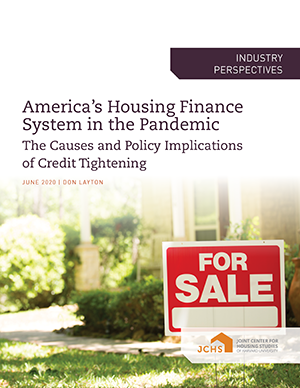 As the economic impact of the pandemic continues, one of the biggest issues to emerge in housing finance is the availability of mortgages. Media reporting and policy discussions often imply that mortgage credit tightening – which has undeniably occurred – is a major problem, maybe even on par with what happened in the financial crisis just over a decade ago. Additionally, especially in the housing finance policy community, the implication seems to be that somehow much or even all of that tightening is illegitimate, a failure of government policy; that it should be largely if not totally avoidable with the right government actions; and that those actions should not require the kind of subsidies we are seeing for small business or specific industries, like the airlines. Is this view legitimate? Or is it all-too-common Washington wishful thinking? Or perhaps something in between?

This paper will answer these questions by examining how mortgages get made in 21st-century America, who sets the credit standards, why those standards are not – and should not be – fully immune to economic conditions, and to what extent government policies other than overt subsidies can help mortgage credit resist unnecessary tightening. The conclusions reached are: (1) that the mortgage credit tightening that we are seeing is much less of an issue than encountered in the prior financial crisis; (2) that it is reasonable and appropriate that there should be tightening to a modest degree, even with the best possible government policy, as risks have gone up in the current economic environment; and (3) that the tightening we are seeing is overwhelmingly a byproduct of the private sector, as it performs its major role in housing finance, behaving as one would expect in an economic downturn – and it would be even worse if government played a lesser role than it currently does.