Turning Distaste Into Taste: Context-specific habitus and the practical congruity of culture 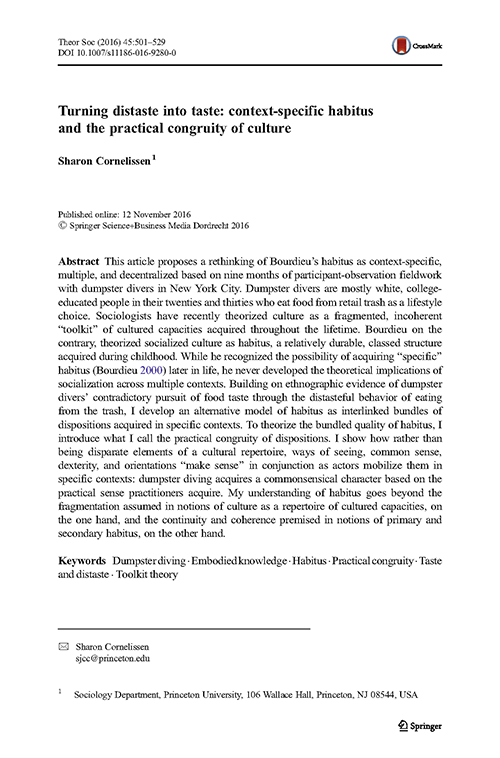 This article proposes a rethinking of Bourdieu’s habitus as context-specific, multiple, and decentralized based on nine months of participant-observation fieldwork with dumpster divers in New York City. Dumpster divers are mostly white, college-educated people in their twenties and thirties who eat food from retail trash as a lifestyle choice. Sociologists have recently theorized culture as a fragmented, incoherent “toolkit” of cultured capacities acquired throughout the lifetime. Bourdieu on the contrary, theorized socialized culture as habitus, a relatively durable, classed structure acquired during childhood. While he recognized the possibility of acquiring “specific” habitus (Bourdieu 2000) later in life, he never developed the theoretical implications of socialization across multiple contexts. Building on ethnographic evidence of dumpster divers’ contradictory pursuit of food taste through the distasteful behavior of eating from the trash, I develop an alternative model of habitus as interlinked bundles of dispositions acquired in specific contexts. To theorize the bundled quality of habitus, I introduce what I call the practical congruity of dispositions. I show how rather than being disparate elements of a cultural repertoire, ways of seeing, common sense, dexterity, and orientations “make sense” in conjunction as actors mobilize them in specific contexts: dumpster diving acquires a commonsensical character based on the practical sense practitioners acquire. My understanding of habitus goes beyond the fragmentation assumed in notions of culture as a repertoire of cultured capacities, on the one hand, and the continuity and coherence premised in notions of primary and secondary habitus, on the other hand.