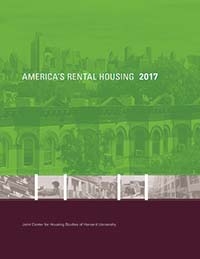 CAMBRIDGE, MA and WASHINGTON, DC – A decade of unprecedented growth in the rental housing market may be coming to an end, according to the 2017 America’s Rental Housing report, which was released today by the Joint Center for Housing Studies of Harvard University. Fewer new renter households are being formed, rental vacancy rates have risen, and rent increases have slowed. At the same time, renter demographics are changing and nearly 21 million households continue to pay more than 30 percent of their income for rent.

“This year’s report paints a complicated picture of the rental market. We’re finally seeing the record growth in renters slow down, but while the market has responded to rental housing needs for higher-income households, there are alarming trends that suggest a growing inability to supply housing that is affordable for middle- and working-class renters, let alone those with very low incomes,” said Christopher Herbert, the Joint Center’s managing director. “Addressing these challenges will require bold leadership and hard choices from both the public and private sector.”

The report is accompanied by a series of interactive tools and charts that explore rental housing trends at the state and metro level, including cost burdens, affordability, and changes in rental supply and demand.

Highlights of the 2017 findings include:

Signs of a slowdown. Overall, rents increased more slowly in most markets across the country. Starts of new multifamily units reached a plateau in 2016 and have now fallen by about 9 percent through October 2017.

The changing nature of renters. While renters are disproportionately younger and lower-income, growing shares of renters are older and higher-income. For example, the number of renter households earning more than $100,000 per year increased from 3.3 million in 2006 to 6.1 million in 2016.

The changing nature of new rental units. Additions to the rental stock are increasingly concentrated at the high end of the market. The share of new units renting for $1,500 or more (in real terms) soared from 15 percent in 2001 to 40 percent in 2016. Additionally, the share of new units renting for less than $850 per month fell from 42 percent of the rental stock to 18 percent. The challenges to building low- and moderate-cost units are most severe in metros like San Jose, San Francisco, Honolulu, and Washington, D.C., where more than 50 percent of all rental units rent for over $1,500 a month.

Affordability continues to be a major problem. Despite rising incomes, nearly half (47 percent) of all renter households (21 million) are cost burdened—meaning they pay more than 30 percent of their income for housing, including 11 million households paying more than 50 percent of their income for housing. While these figures are down slightly from recent years, the number and share of cost-burdened renters is much higher than it was in 2001, when 41 percent (15 million) were cost burdened. Burdens are particularly high in Miami, Los Angeles, New Orleans, and San Diego, where 55 percent or more of renters are cost burdened.

Addressing these challenges—particularly expanding the availability of low- and moderate-cost housing options—will require that all levels of government ensure that the regulatory environment does not stifle innovation, and that tax policy and public spending support the efficient provision of moderately-priced housing.

You can view the full report and interactive metro-level tools here.