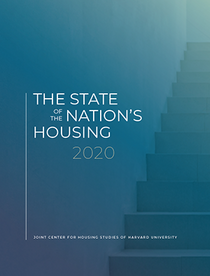 CAMBRIDGE, MA – For most of 2020, the US has been beset by the COVID-19 pandemic, social unrest sparked by racial injustice, and the devastating impacts of climate change. According to the 2020 State of the Nation’s Housing report, in all this upheaval, the nation’s housing challenges have never been so evident—particularly the lack of affordable rental housing, unequal access to good-quality homes, and the vulnerability of much of the housing stock to natural disasters. And while historically low interest rates and continued strength in many economic sectors have given a boost to the for-sale housing market, for many, the economic crisis brought on by the pandemic has worsened affordability challenges.

Worsening Affordability for Renters
According to the new report, the economic fallout from the pandemic has amplified the rental affordability crisis. As of late September, renters earning less than $25,000 a year were much more likely to report lost employment income since the March shutdown. [Interactive Chart] Indeed, more than half of lowest-income renters lost wages during this period, compared with 41 percent of all households, and roughly one in five renters earning less than $25,000 also said they were behind on rent. “So far, state and federal moratoriums have slowed evictions,” says Chris Herbert, Managing Director of the Joint Center for Housing Studies. “But without additional federal aid, many households that have missed payments may be unable to cover their back rents and will find themselves on the brink of eviction and at risk of homelessness.” [Interactive Map]

Homeowners Affected by Pandemic as Well
Homeowners have not been spared from the effects of the pandemic, and low income and households of color have taken a disproportionate hit. While 36 percent of all homeowners reported losing income between March and September, the shares are as high as 44 percent among owners earning less than $25,000, 41 percent among Black owners, and 49 percent among Hispanic owners. Additionally, while 7 percent of white homeowners were behind on mortgage payments in late September, the share was nearly two-and-a-half times higher among Hispanic (18 percent) and Black (17 percent) owners, and twice as high among Asian owners (12 percent).

Persistent Racial Disparities in Housing Markets
“Widespread calls for racial justice have pointed out the high degree of residential segregation and economic inequality that still exists in the US,” says Daniel McCue, a Senior Research Associate at the Center. “In fact, the sharp racial disparities in housing are both a cause and a consequence of other social inequalities.” People of color are heavily concentrated in high-poverty neighborhoods and underrepresented in higher-income areas. Nearly two-thirds of the poor Black, Hispanic, and Native American populations live in communities with poverty rates above 20 percent, about twice the share of poor white Americans. They have far higher cost-burden rates and account for a disproportionately large share of the homeless population. Additionally, the Black-white homeownership gap is larger than it has been in decades at fully 31 percentage points. [Interactive Chart]

The Devastating Effects of Climate Change
So far in 2020, the United States has experienced 16 distinct billion-dollar natural disasters, making this year one of the three worst on record. The cost of damages neared $50 billion as of September, surpassing the total for all of 2019. Climate change has also added to the number of low-income households facing energy insecurity. This was especially true during the record summer heat, when the need for air conditioning was extreme, which added to utility bills for households with access to air conditioning and threatened the health and lives of those without.

Could Housing Lead the Economic Recovery?
Despite these many housing challenges, single-family construction in the US started the year at its fastest pace since the Great Recession and, after a brief pause in April, was running back at a 1.1 million annual rate by September, a 22 percent increase from a year earlier. While construction could be a key component of the country’s economic recovery, the supply of homes for sale has not kept pace with demand: with historically low interest rates contributing to demand, only 1.47 million existing homes were on the market in September, the lowest level in decades. While many in the country continue to struggle with the fallout from the pandemic, those who have maintained their employment are likely to continue to fuel strong demand for housing.

The Case for a New National Housing Agenda
The economic dislocation caused by the pandemic has underscored, perhaps as never before, the fundamental importance of secure, adequate, and affordable housing for all. It has also revealed just how many millions of cost-burdened households are facing housing insecurity. [Interactive Map] Indeed, those with good-quality, appropriate housing have been more likely to maintain their health and financial security this year, while those without adequate resources have faced not just the risk of eviction or foreclosure, but greater exposure to life-threatening illness from COVID-19.

“To be effective, a new national housing policy would set out the appropriate roles and responsibilities of federal, state, and local governments in meeting the country’s needs,” says Herbert. “Among other things, it would establish funding sources and distribution channels for subsidies, create incentives for efficient private production of housing through regulatory and tax structures, and ensure the availability and affordability of mortgage financing as well as the stability of the housing finance system.”

Between the effects of the pandemic, the nation’s reckoning with its painful history of racial discrimination, and the series of devastating natural disasters, 2020 has been among the most difficult years in American history. All of these sources of distress have important ties to longstanding housing policy issues. The hope is, now that these challenges are so clearly in the spotlight, we can finally re-envision a national housing policy and recommit to the goal to a decent home in a suitable living environment for all.