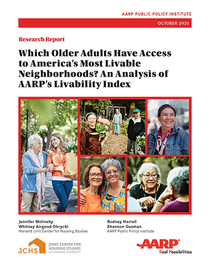 CAMBRIDGE, MA - A rapidly aging population has helped spur recognition of the importance of creating livable and age-friendly neighborhoods, where people of all ages can maintain independence and a high quality of life. However, a new report from the Harvard Joint Center for Housing Studies and the AARP Public Policy Institute shows that most older adults in the US do not reside in livable communities—places that score high on the AARP Livability Index—and there are significant differences between who has access to the country’s most livable communities. According to Which Older Adults Have Access to America’s Most Livable Neighborhoods? An Analysis of AARP's Livability Index, these differences depend on whether the resident is a homeowner or renter, whether they have a disability, and by race/ethnicity and income. The new report will be released in a livestreamed event this Friday, October 30 (register to attend).

While livability is ultimately subjective, the AARP Livability Index identifies key aspects of the built, economic, and social environments that contribute to community and individual well-being, and measures the degree to which those aspects are present in communities. Using data from the Index and the American Community Survey, the new report finds that renters and Asian older adults are more likely to live in high livability neighborhoods while homeowners, middle-income households, older adults with disabilities, and white older adults are more common in places of low livability. Shares of Black and Hispanic older adults hold steady across neighborhoods of all levels of livability.

However, even America’s most livable communities are not necessarily livable for the same reasons, and access to neighborhoods with the most livable features is uneven. For example, renters, Hispanic, and Black older adults are overrepresented in neighborhoods with high scores for housing, amenities, and transportation, but homeowners and white older adults are overrepresented in places with high scores for opportunity, engagement, and environment. Both older renters and lower-income owners are less common in places with the highest scores for health. (Livability categories explained)

The report also found that older adults who move are not relocating to more livable neighborhoods. Indeed, three-quarters of older adults who moved recently relocated to neighborhoods with roughly the same livability score as their previous location, with only 11 percent moving to more livable locations, and 14 percent moving to areas that received lower livability scores.

“Older adults who move are often constrained by family proximity and finances, given that on average the most livable communities also feature the highest housing prices,” says Jennifer Molinsky, a Senior Research Associate at the Harvard Joint Center for Housing Studies. “Yet it may also be the case that older movers are not prioritizing certain livability features that could support them in later years.”

“This report illustrates the challenges that many communities face in supporting people as they age,” says Rodney Harrell, VP of Family Home and Community at AARP. “We need to ensure equitable access to the benefits that livable communities can offer, including for those living in higher-scoring neighborhoods. Every neighborhood has tradeoffs and every community can improve. Our findings support policy solutions to address barriers and improve livability for people of all ages and older adults more specifically.”

The report, authored by Jennifer Molinsky and Whitney Airgood-Obrycki of the Harvard Joint Center for Housing Studies and Rodney Harrell and Shannon Guzman of the AARP Public Policy Institute, will be released in an online event this Friday, October 30 (registration required). Following a presentation of the report’s findings, some of the authors will be joined by Kathleen Otte (US Department of Health and Human Services) for a panel discussion about implications for current and future older adults in the US.