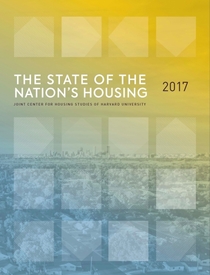 Cambridge, MA – A decade after the onset of the Great Recession, the national housing market has, by many measures, returned to normal, according to the latest State of the Nation’s Housing report, released today by the Joint Center for Housing Studies of Harvard University. Housing demand, home prices, and construction volumes are all on the rise, and the number of distressed homeowners has fallen sharply. However, along with strengthening demand, extremely tight supplies of both for-sale and for-rent homes are pushing up housing costs and adding to ongoing concerns about affordability (map+ data tables). At last count in 2015, the report notes, nearly 19 million US households paid more than half of their incomes for housing (map + data tables).

National home prices hit an important milestone in 2016, finally surpassing the pre-recession peak. Drawing on newly available metro-level data, the Harvard researchers found that nominal prices in real prices were up last year in 97 of the nation’s 100 largest metropolitan areas. At the same time, though, the longer-term gains varied widely across the country, with some markets experiencing home price appreciation of more than 50 percent since 2000, while others posted only modest gains or even declines. These differences have added to the already substantial gap between home prices in the nation’s most and least expensive housing markets (map).

“While the recovery in home prices reflects a welcome pickup in demand, it is also being driven by very tight supply,” says Chris Herbert, the Center’s managing director. Even after seven straight years of construction growth, the US added less new housing over the last decade than in any other ten-year period going back to at least the 1970s. The rebound in single-family construction has been particularly weak. According to Herbert, “Any excess housing that may have been built during the boom years has been absorbed, and a stronger supply response is going to be needed to keep pace with demand—particularly for moderately priced homes.”

Meanwhile, the national homeownership rate appears to be leveling off. Last year’s growth in homeowners was the largest increase since 2006, and early indications are that homebuying activity continued to gain traction in 2017. “Although the homeownership rate did edge down again in 2016, the decline was the smallest in years. We may be finding the bottom,” says Daniel McCue, a senior research associate at the Center.

Affordability is, of course, key. The report finds that, on average, 45 percent of renters in the nation’s metro areas could afford the monthly payments on a median-priced home in their market area. But in several high-cost metros of the Pacific Coast, Florida, and the Northeast, that share is under 25 percent. Among other factors, the future of US homeownership depends on broadening the access to mortgage financing, which remains restricted primarily to those with pristine credit.

Despite a strong rebound in multifamily construction in recent years, the rental vacancy rate hit a 30-year low in 2016. As a result, rent increases continued to outpace inflation in most markets last year. Although rent growth did slow in a few large metros—notably San Francisco and New York—there is little evidence that additions to rental supply are outstripping demand. In contrast, with most new construction at the high end and ongoing losses at the low end (interactive chart), there is a growing mismatch between the rental stock and growing demand from low- and moderate-income households.

Income growth did, however, pick up last year, reducing the number of US households paying more than 30 percent of income for housing—the standard measure of affordability—for the fifth straight year. But coming on the heels of substantial increases during the housing boom and bust, the number of households with housing cost burdens remains much higher today than at the start of last decade. Moreover, almost all of the improvement has been on the owner side. “The problem is most acute for renters. More than 11 million renter households paid more than half their incomes for housing in 2015, leaving little room to pay for life’s other necessities,” says Herbert.

Looking at the decade ahead, the report notes that as the members of the millennial generation move into their late 20s and early 30s, the demand for both rental housing and entry-level homeownership is set to soar. The most racially and ethnically diverse generation in the nation’s history, these young households will propel demand for a broad range of housing in cities, suburbs, and beyond. The baby-boom generation will also continue to play a strong role in housing markets, driving up investment in both existing and new homes to meet their changing needs as they age. “Meeting this growing and diverse demand will require concerted efforts by the public, private, and nonprofit sectors to expand the range of housing options available,” says McCue.

The State of the Nation’s Housing 2017 will be released by live webcast from the National League of Cities on Friday, June 16 at Noon (ET).