Opportunity and Progress: A Bipartisan Platform for National Housing Policy

Debates about housing programs too often become mired in partisan battles instead of addressing innovative ways to solve housing problems as a country. Historically, successful housing programs are only developed with the support of both political parties. Two former U.S. Department of Housing and Urban Development Secretaries-one democrat and one republican-a former CEO of a housing trade association-who is a republican-and a director of a housing research center-who is a democrat-set aside their differences to focus on today's housing challenges. In a new book, Henry Cisneros, Jack Kemp, Kent Colton, and Nicolas Retsinas reassert housing as a national priority and ask that the federal government assume its place at the table partnering with states, localities, and both public and private sector organizations to address housing issues throughout the nation. 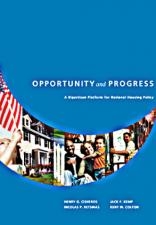