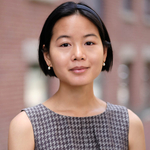 Bailey Hu is a Research Assistant on projects related to housing and older adults. Before joining the Center, she was a fellow at the City of Boston's Department of Neighborhood Development, where she...

Recent data show that in the last year, older households of color struggled to pay rent or mortgages at higher rates than white, non-Hispanic households. The US Census Bureau’s Household Pulse Survey (HPS) shows differences by age as well, with those 65-79 experiencing more difficulty covering food and other expenses than their 80-and-above counterparts. Worryingly, for some subgroups these disparities have widened over time.

The HPS, conducted on a weekly or biweekly basis since April 2020, offers a detailed view of how households across the country have been impacted by the pandemic. Because of methodology changes and a relatively small sample size – averaging 21,000 older adults per survey – I grouped the data into quarters from October 2020 through August 2021. The weights provided by the Census Bureau allowed me to estimate the total number of households impacted in each time period.

The results show that, similar to an earlier analysis at the Center, older racial and ethnic minority-headed households as well as renters were harder hit by the effects of the pandemic. Loss of income likely impacted the stability of housing situations as well as the ability to purchase food and other necessities. In addition, some race-based gaps have persisted over the last year despite increased calls for equity in policymaking and practice.

When breaking down trends by race, ethnicity, and tenure type, dramatic disparities emerge. They are particularly apparent among older renter households. During the last year, Black households were on average twice as likely to be behind on rent compared to white households. In addition, over a quarter of older Asian renter households reported being behind on housing payments.

Figure 1: Over 15 Percent of Asian, Black, and Hispanic Older Renters Were Behind on Housing Payments 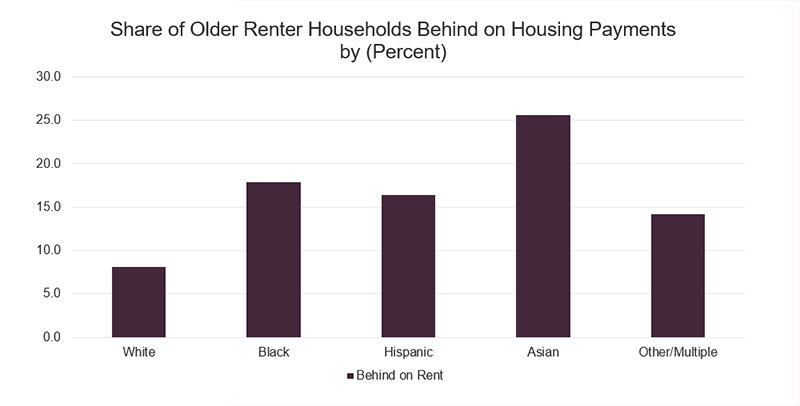 Notes: White, Black, and Asian households are non-Hispanic. Hispanic households may be of any race.

The HPS data does not fully explain why such high proportions of older Asian renters – a relatively small subgroup in the US – experienced housing insecurity. One possible reason is that compared to renters as a whole, a greater proportion of Asian renters live in metropolitan areas, where housing prices may be higher. It is also possible that the HPS inconsistently captured respondents who represent a wide range of financial means and backgrounds: over the last four quarters, the share of Asian renters who reported having a high school education or less varied from 29 percent to over 40 percent.

Examining both renters and homeowners, some measures of economic wellbeing showed improvement over time. In the first quarter of 2021, over 30 percent of older Black, Hispanic, and Asian households reported having lost employment income during the pandemic compared to 21.4 percent of white households. Over the last year, however, difficulty paying for “usual household expenses” such as food and medical care has dropped across all racial and ethnic groups.

But gaps among groups remain. The rates at which older households reported not having had enough to eat in the last seven days have remained persistently higher for Hispanic and Black households compared to white and Asian households. Although the measure has improved for older Hispanic households over time, in the last quarter over 8 percent – an average of nearly 182,000 per survey – still experienced food insufficiency.

Figure 2: Race-based Disparities in Food Security Persisted Over the Pandemic 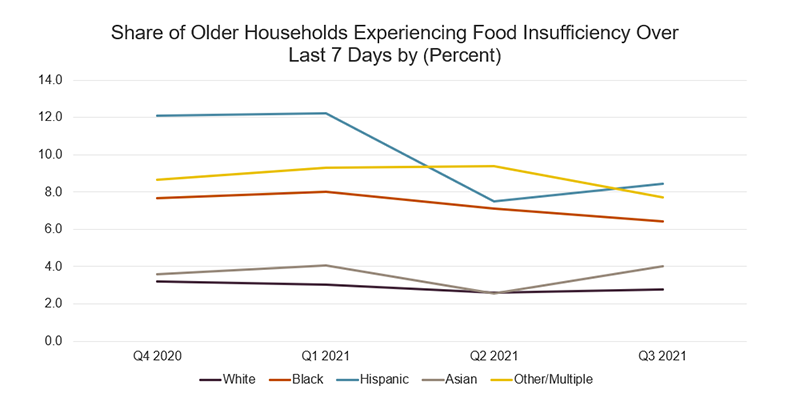 Notes: White, Black, and Asian households are non-Hispanic. Hispanic households may be of any race.

Differences also emerged across age cohorts. Although renters were generally more likely to fall behind on housing payments compared to homeowners with mortgages, experiences varied based on the age of the household. Among those 65-79, an average of 233,000 renter households reported being behind on payments at the time of each survey. Over all four quarters, renter households ages 80 and above were more likely to be current on their payments.

Among homeowners, the trend is reversed: a slightly higher proportion of homeowners 80 and above were behind on mortgage payments compared to the younger group. In addition, while increasing shares of renter households reported difficulty making payments over time, the situation for older homeowners of either age group appears to have improved slightly in the last year. 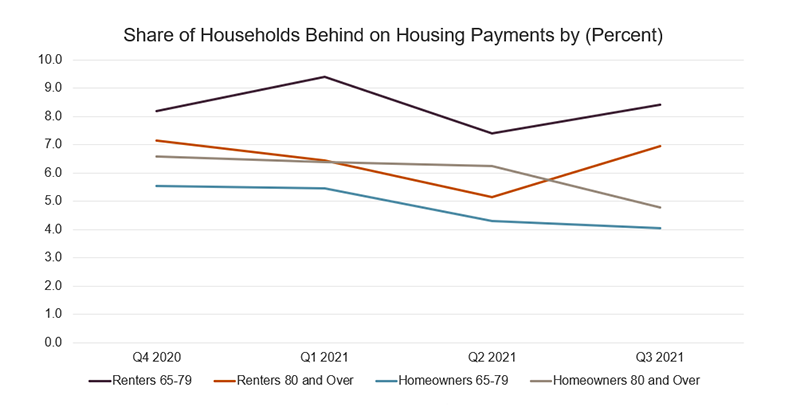 Compared to the number of older respondents who reported late housing payments, more older adults experienced difficulty paying for household expenses. This suggests that the financial strain of the pandemic caused some to cut back in areas besides housing. While figures improved over 2021, as of this fall, 16.3 percent of households aged 65-79 and 11.4 percent of those 80 and over reported recently struggling to pay for general expenses. 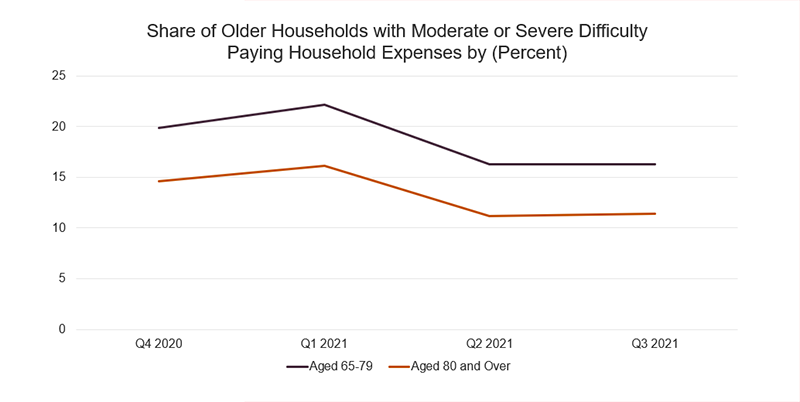 Similarly, those aged 65-79 have been consistently more likely than households 80 and above to have recently experienced food insufficiency, with the former peaking at 4.5 percent in early 2021. While both age cohorts saw improvement in Q2 2021, there was a small uptick in food insecurity in Q3 2021.

Lessons from the Data

The economic fallout of the pandemic, including loss of jobs and difficulty paying for housing and essential goods, has impacted hundreds of thousands of older households. In line with our Housing America’s Older Adults 2019 report, as well as earlier analysis of the HPS, recent data shows persistent and alarming disparities among older adults of different races, tenure types, and ages. These findings suggest that preexisting gaps in economic stability have not only carried on into the pandemic, but may have widened in some respects.

Two years into the current health crisis, policymakers and practitioners should redouble their efforts to aid those who need it most, especially older renters of color and households who rely on income from employment.